Or why Obama leaves the people with nothing but "change". 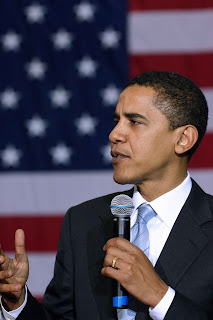 Recently the U.S. Congress adopted the American Recovery and Reinvestment Act, Obama's plan to get the U.S. economy back on top. Approved widely in Europe, Flemish newspapers like “De Morgen” dream loudly of a return to Keynesian economics and the interest in more centralized forms of economic planning is growing. But there is nothing progressive about that. On the contrary. In particular, the monetary policies of Obama will cause a disaster. Mark my words.

787 000 000 000 dollar. This is the astronomical amount that the U.S. economy is injected with in Obama's plan. That is huge, considered that the US economy as a whole, is "only" worth 13 800 billion dollar. The investments that Obama makes are therefore nearly 6 percent of GDP. But that’s not everything. The Paulson-plan, still conducted under the Bush administration injected already 700 billion dollars. And mid March, the Fed announced to inject another 1200 billion dollars into the US economy.

Together with a number of other "collateral measures" it is safe to say that in a few months time the American economy received an injection was worth not less than 30% of its GNP. Never has a government spent so much. If there is still discussion about the usefulness of government intervention, then this is the biggest test case ever. Obama's plans seem to be the wet dream of every European social-democrat. But that things will go pear shaped is already written in the stars. We are blinded by the expenditure side, without looking at the revenue side. And with that side things are going thoroughly wrong.

Obama invests in green energy, social welfare, infrastructure and science, in education. But where does all that money come from? Are taxes in America increased then? Not at all, because the listed investments are in fact the smallest part of the stimulus package. More than half of that arrangement is tax relief, lówer taxes. Higher expenses and lower revenue, how can that be funded at the same time? Who had "deficit spending" had in mind, is thinking wrong. Deficit spending would mean that the government used taxpayer’s money to stimulate the economy, or at least make loans. But that isn’t the case. No dollar of all these plans is tax money. On the contrary. They are rolling of the printing presses of the Federal Reserve at this very moment.

There’s your answer! What Obama thus does is no more and no less than printing fresh money. A malevolent observer would say that, keeping President Mugabe in mind (231 million per cent inflation in Zimbabwe, November 2008) Obama's African roots have something to do with it, but that would be a bridge too far. Obama is just doing what every president since Nixon of the U.S. has been able to do in an unbridled fashion: inflating the money supply and thus administering heroin to an unhealthy economy. This is possible because on Sunday, August 15, 1971, the last check on the value of money, namely the Law of Gresham, was put out of game. But before we look into that, we need a piece of monetary history to be able to understand how the economic turmoil has come to where it is now.

In the beginning there was nothing. Man wandered about the fields and lived from hunting, fishing and picked whatever he could find. Because one individual had a bit of fish in overabundance, and some other a surplus of berries he couldn’t eat right away, they were exchanged for one another. And wood with meat. A lump of silex for a good piece of leather. And so on. With the increasing complexity of the division of labor in society, barter also refined itself. Because how do you trade a plough for berries? You couldn’t possibly accept hundreds of berries for that exchange, because they would rot before you could eat them. Or maybe you could, if you managed to exchange some of those berries again for other goods.

In fact, that is how indirect exchange emerged: the berries itself were no longer sought, they rather served as a medium of exchange for other goods. Those berries were money. In this perspective, money is nothing more and nothing less than a medium of indirect exchange. Something we seem to have forgotten in our modern times.

From then on it went fast. People increasingly exchanged an intermediate product that everyone could use and that was small enough as a unit to buy a lot of different things. These intermediary exchange resources could be anything, there was no standard. But gradually, out of all the possible exchange materials (berries, fish, straw), the free market selected that exchange product that would be the most steadfast of quality and have the longest sustainability in time. After centuries of free competition between all types of exchange funds, two goods, gold and silver accrued as regular payment.

What is of prime importance in the overview of this development is that gold, as the most common used tender, is a real economic good. It is transferable as cheese, divisible as flour, sustainable as water. Just by having those excellent qualities, and not solely because of its scarcity, it has become the most widely spread tender. This is forgotten in collective memory. In our economic perception money is just a convention, a confidence issue. But it is not! Money has derailed into being a fiat-based standard, and that's the problem!

Where did it go wrong then? Sketching the entire monetary history would lead us too far, but we should not skip an essential step: the emergence of banks. Banks came in to existence under the influence of traders who found that payments in gold were too dangerous and inconvenient for trade, especially for large transactions.

They preferred to deposit their gold with a custodian who wrote them an IOU, which is in its most essential meaning an instrument of debt. From then on payments could be performed by handing over of this debt instrument to the trading partner, which could pick up the gold in the bank at any time he wanted. It is these debt vouchers that are the predecessors of today's banknotes …

Was it not that there is one important difference with the past. Those first banknotes indeed represented real value. At any given time, the concerned trading partner could convert the debt certificate in the material that it represented. Throughout time that was more and more often gold, but it could just as well be as tobacco in Virginia. There, tobacco notes, a debt security denominated in a weight of tobacco, were valid tender. No matter what the underlying material was, any denomination on paper always represented a weight in reality. And that’s where everything went wrong: Nixon cut that tie between the paper promise and its underlying value.

He did that because the monetary arrangements which had previously been made in Bretton Woods, no longer appeared tenable. On that monetary conference, the U.S. had committed themselves to make every dollar redeemable in gold, as it should be. The U.S. could easily make that promise, because by the end of WW II, due to European inflation which drove all the gold out of the old continent, the U.S. had a reserve of a weight in gold that can be expressed as 25 billion dollars. That promise would have been tenable today were it not that the successive U.S. governments since World War II, inflated the dollar increasingly. And mainly to finance a lot of wars.

Under a gold standard governments do not go unpunished for inflating their currency. In free markets, there a monetary mechanism is active that can be stated in the following phrase: "bad money drives out good money". This is the law of Gresham. It is of great importance to understand this monetary law, to be able to frame Nixon’s decision, and to understand the origin of the misery that we experience today.

Gresham's Law comes down to this. When a government conducts currency devaluation, and coins from before and after the devaluation are legally proclaimed to be equal in value, the coins with the highest intrinsic value will be exchanged for foreign currency, with which the lower valued units of domestic currency will be bought back, as to dodge inflation.

Specifically: if a dollar is defined by the government as a weight of 35 ounces of gold, and then that same government decides to inflate the currency (for example, 1 dollar = 34 ounces of gold), banknotes issued before the date of that inflationary measure will flow abroad. In the interior, you hardly notice anything, but in import transactions you will: businesses will always pay with the old, "good" coins. It was like that in the Middle Ages, and that still holds true. It takes some time before all notes are exchanged, but in the end notes with the greatest underlying value will flow abroad. And thus also the rights on the underlying value of these notes itself. And that is, as we know in our present times, gold.

That was precisely the issue of the U.S. in 1971. By inflating its currency during the decades 50 and 60, a lot of older and thus more valuable dollars disappeared abroad. They were known as Eurodollars. Just before the blowup of Bretton Woods, of the initial gold reserve of 25 billion dollars of gold, only 9 billion dollars remained in the US vaults. And on top of that more than 80 (!) billion of such unclaimed dollars circulated in Europe. Het was duidelijk dat de VS nooit meer aan al haar terugbetaalverplichtingen zou kunnen voldoen. It was clear that the U.S. could never back all its obligations with gold anymore, and that to keep the promise of redeeming every dollar in gold would mean the end of the country. So instead of admitting that the previous U.S. governments had unbridledly inflated their currencies, Nixon found that the attack was the best defense, and declared that the United States from that Sunday on would not repay their dollars in gold.

This is the greatest legalized theft in the history of mankind. What Nixon in fact did, was to say that the U.S. would never have to repay its debts. Henceforth there would be no longer be a liaison between the paper that is called a dollar and its underlying value. The auto-censoring force of the law of Gresham, namely that coins will be exchanged with foreign countries until their purchasing power has been restored, was put out of game. From now on, the U.S. Government's could inflate their currency without ever someone presenting them the bill.

In this perspective the monetary policy of Obama is in nothing different to that of his predecessors. The website www.recovery.gov states: "This is your money. You have a right to know where it's going and how it's being spent. Learn what steps we're taking to ensure you can track our progress every step of the way.” There should be:" This is newly printed money. You have the right to condemn this government for monetary fraud. Learn what steps we're taking to make sure you'll never find out. And you’ll see we’ve been fooling you all the way.”

Obama thus already brings no change in the economic field. He is monetizing the debt of the U.S. on the backs of the American public, and leaves them with nothing but “change”. That is: in the monetary meaning of the word: “keep the change”. We’ll spend the rest of your money.

This is the summary of larger essay on monetary policy, soon to be downloaded via www.smithsonsplace.eu